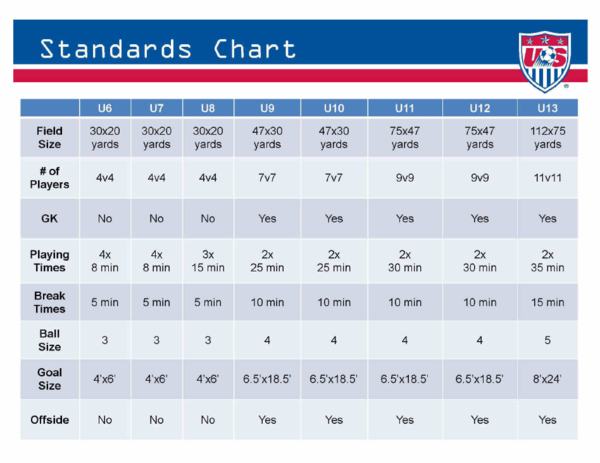 Over the last four years, US Soccer has introduced new licenses, new initiatives and new programs. Now in conjunction with US Youth Soccer, the 55 DOCs and the State associations, they are introducing two vital changes that all clubs, whoever they are affiliated with, have been told they must follow. It is worth noting and stressing that these new rules and game formats impact everyone. There is no opting out, and after the initial phase, all are expected to follow.

The table below presents the progressions and standards that all youth clubs must have in place by August 2017. Clubs are suggested to put these in practice by August 2016. An overwhelming majority of soccer education experts in the country support the move to the standard presented for the obvious reason that small sided games on smaller fields equates to:

Having recently been a part of a good number of webinars as the new standards are introduced, I can honestly say that no one is going to scream and shout if a goal is one or two feet too big or small or a field is three or four yards out in size. What is expected and demanded by US Soccer is that by 2017 the overriding principles contained within the small sided games initiative are being followed.

Personally, I believe that standards are a good thing that will lead to greater player development, more fun for our players, and as a consequence, more skillful players as they grow. I particularly like the idea of a “build out line” at the U9, U10 age to attempt to get this age group to play a possession-based game. I have concerns that the field size at this age (47-by-30) is a little small, but overall, I am willing to support and embrace change as I can’t help but believe we can no longer live with 70 percent leaving the sport by the age of 13.

Change must be tried, and perhaps this move to small sided games throughout the country will be the tipping point the game drastically needs.

By August 2017, all teams must be formed on calendar birth year. Birth-year registration calendars will now align with the start of the calendar year and run from January-December, rather than August-July as it had previously. The simple objective of this change is to bring a uniform approach to youth and national team programs.

While it may be painful for a short time, this move to age group and birth year conformity is another much needed change that will help keep the United States in line with the rest of the soccer playing world. This move will also ensure a level playing field across the states in tournaments and premier level leagues.

It is fair to say that it is the birth year initiative that has many coaches and parents most concerned. The basis for these concerns has deep roots in the fear that teams who have been playing together for a while will now have to reform and players will have to find new teams. This is coupled with parents who are apprehensive about their children making new friends and finding new teams. Although I understand the fear and apprehension, I would stress the following truths:

I have no doubt that all the kids who love playing will survive the age group move and will indeed make new friends and play on new teams. For most parents this social growth and their kids developing the ability to get along with new sets of players is one of the most important benefits of sports.

Any league or club official or interested soccer parent that would like a complete breakdown of both new initiatives can find the information at: http://www.ussoccer.com/stories/2015/08/24/18/07/150824-coaching-player-development-initiatives-rel

Alternatively, please feel free to contact me directly via e-mail at timb@ukelite.com with any questions you may have.

Tim Bradbury is UK Elite Soccer’s Director of Coach Education, and he will regularly share his views and opinions on the state of youth soccer in the United States.